My most serious goal in 2015: make homemade pasta.  I waited until today, December 31, but I achieved this goal. 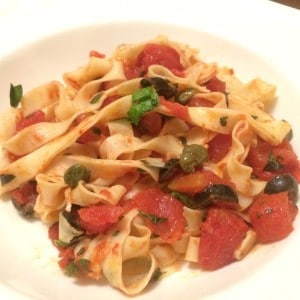 I made homemade fettuccini noodles with a puttanesca sauce.  Delicious!  If you’re curious, I used a recipe from Williams-Sonoma’s “Pasta” cook book.

A few of my favorites from the past twelve months:

I had several useful career accomplishments in 2015.  I attended conferences like Velocity, organized Amazon’s internal web development conference in Seattle, and presented about web development career paths to international teams. I had a big impact through numerous contributions to our front-end framework (changes which you either have seen or will see).  All-in-all: a good year.

I had a good year in terms of open source development.  While many of my changes were minor documentation improvements, I made a few bug fixes and improvements to tiny libraries, and continue development of my own side projects in the open on GitHub.  The one I’m most excited about is the development of my first iOS app using React Native.  I’m calling it “Well Versed” for now, and I’m hoping to release it early in 2016.  It’s been a great way for me to learn new JavaScript features and skills (ES6 / ES2015, Babel, React Native, flux pattern, codemods), and I’m hoping to have more opportunity to apply these skills in the future.

In November 2014, I finished reading “Team of Rivals: The Political Genius of Abraham Lincoln” by Doris Kearns Goodwin. The book covers Abraham Lincoln and his cabinet members. Fabulous book! Well written. It develops and shows the personalities, characters, and actions of the men and women closest to Abraham Lincoln, his cabinet, and administration leading up to and through the American Civil War.

This post catalogs leadership principles and character qualities that stood out to me while reading the book.

Lincoln forgave men who didn’t deserve it. He conferred positions on men who he had no reason to honor based on their behavior towards him. This served him well; he earned many lifelong friends and trusted allies through this behavior.

During one of his senate races, Lincoln sacrificed himself and his delegates to ensure his party would win the race. The grateful Lyman Trumbull ended up helping with his presidential candidacy later.

He awarded Chase with the Chief Justiceship despite Chase’s presidential ambition and attempts to harm Lincoln’s reputation while seeking the nomination for the Republican Party when Lincoln ran for his 2nd term.

Chase quoted scripture from the Bible, but was blind to his own character flaws and the harm he did his fellow cabinet members and the President.

Lincoln gave Stanton the Secretary of War Department position despite Stanton having insulted him during a patent trial in Cincinnati years earlier.

Do not criticize a servant to his master

In context, Lincoln was telling somebody not to criticize one of his cabinet members and quoted a verse from Proverbs 30. This can be applicable in a modern work context as well. If a manager is pleased with the work if his employee and you have complaints to bring, you may be cursed by the manager.

Push for progress at the right pace and right time

Lincoln constantly gauged the opinions of the people – the common folks, soldiers, politicians. He pushed for progress and moved towards emancipation, but as President he moved slower than the radical Republicans wanted, and faster than conservatives.

Lincoln befriended Frederick Douglass and this friendship helped him to improve his perception and views regarding black men.

He balanced his cabinet geographically and from disparate segments of the Republican Party. He did this to achieve unity and hold the party together. He used these men for their amazing talents.

Lincoln deferred to the views of his cabinet members when they told him he was wrong and had good reason for it.

Sum of the Man

Lincoln had many good qualities one can learn about and take as examples for living. I aim to apply these character qualities in my own life and have had opportunities to consider and attempt to implement them since reading the book. When thinking about innovation and technology, Sam Walton probably isn’t the first person you think about, and Wal-Mart may not be one of the first companies. Americans in the Millenial Generation often take Wal-Mart for granted — it’s the huge store with low prices, and locations in every town you live in, drive through, or visit. We have never known life without Wal-Mart, we have never known life without discount retailers, and we did not observe its rise.

Once upon a time, Wal-Mart was a start-up. We never knew it or have forgotten about it. I believe we could stand to learn more about innovation and technology by learning more about Wal-Mart, the creation of the discount retail market, and the innovation that brought about its rise and success. Wal-Mart sits atop the Fortune 500 list for 2013 and had $443.9 billion in sales for 2012.

In the tech community (the folks that hang out on Hacker News and obsess over TechMeme all day), I don’t see many articles about Wal-Mart. HN Search turns up only three stories with the term “Wal-Mart” or “Walmart” in the story title with over 100 points, and one of them is about Amazon. Contrast that with a quick search for “Amazon” in the title and you’ll see stories with 100+ points until the 18th page (as of Dec. 23, 2013; it’ll change with time).

I started studying Wal-Mart after reading a book about Amazon. In November, I finished reading Brad Stone’s book about Amazon called The Everything Store, and it pointed a fairly large sign at Wal-Mart and Sam Walton as a source of inspiration for Bezos. The book mentioned it, and listed Sam Walton’s “Made in America” book second on “Jeff’s Reading List” in the appendix. (I consider this appendix the most valuable part of “The Everything Store”.)

Next, I read “Made in America” and finished it in two days. Let me share with you what I learned from Sam Walton through this book.

Sam Walton was a growth “hacker”
Sam Walton got after it. He began working and learning about business from a young age. He wasn’t afraid to try new things. He experimented.

He ran a Ben Franklin five-and-dime store and created a few Walton’s Five and Dime stores. He learned new ideas about retail in the process, and continued learning with his first Wal-Mart store and every subsequent store he opened.

His entire life, he studied the competition. He drew in customers with low prices, and kept them coming back for more. From there, he rolled out more stores, drew in more customers with the same value proposition, and continued growing Wal-Mart until stepping down from CEO and President in 1988.  He passed away in 1992.

I can’t point you to a simple formula, and the summary above leaves out so much.  I would recommend reading his book and studying his methods – you can’t replace a book with a blog post. In the book, he says a lot about how he started the company, why he started the company, and how it was able to succeed and grow. He even discusses how other companies can compete with it.

I’d like to share with you several of my favorite quotes from the book. The business wisdom contained within is relevant to startups and other businesses.

“When folks have asked me, “How did Wal-Mart do it?” I’ve usually been flip about answering them. “Friend, we just got after it and stayed after it,” I’d say.”

“We exist to provide value to our customers, which means that in addition to quality and service, we have to save them money. Every time Wal-Mart spends one dollar foolishly, it comes right out of our customers’ pockets. Every time we save them a dollar, that puts us one more step ahead of the competition—which is where we always plan to be.”

“Looking back on such boyhood episodes helps me to realize now that I’ve always had a strong bias toward action—a trait that has been a big part of the Wal-Mart story.”

“If I had to single out one element in my life that has made a difference for me, it would be a passion to compete.”

“We paid absolutely no attention whatsoever to the way things were supposed to be done, you know, the way the rules of retail said it had to be done.”

“When you’re opening 150 stores a year the way we do these days, a lot of your planning is necessarily short term. But to sustain that kind of growth, you constantly have to consider what you’re going to be doing five years out.”

Technology
Sam Walton used cutting edge technology. He revolutionized retail and enabled Wal-Mart’s expansion and growth by investing in technology while maintaining frugality and passing on the savings to the customer.

Fin
A final quote from Sam Walton you will need to succeed in business: “SWIM upstream. Go the other way. Ignore the conventional wisdom.”

Disclaimer: Viewpoints and opinions expressed in this article are my own and do not reflect those of my employer, my colleagues, or any other person.  (I work at Amazon.)